Counterfeiting money is as old as money itself. It's been around for as long as there has been legitimate currency. From Roman times to modern society. To give you some perspective, during the Civil War era it was estimated that one bill out of three was a counterfeit note. That's crazy.

On July 5th, 1865, the United States Secret Service was established by President Lincoln. Its only purpose at the time was to combat counterfeited money. It wasn't until 1902, one year after the assassination of President William McKinley, that the Secret Service took on the role of protecting the president.

Technology advances have been a double-edged sword. It's given us an extensive array of ways to detect counterfeit money, but at the same time technology has made it easier to produce it. Counterfeiting used to be a difficult and expensive endeavor. It required large printing presses and the ability to cut intricate designs by hand into metal plates. Today, you can create fake money with a PC, a scanner and a color inkjet printer.

One method of counterfeiting is easy to pass low-grade detectors is what's known as bleaching. It involves taking a $5 bill for example and using household chemicals, remove all the ink and markings. Then it is copied over with the image of a $100 bill. The lower grade counterfeit detectors can mistakenly pass it because the paper is authentic.

What most good citizens don't understand is that you can receive counterfeit money innocently enough, but if it's detected when you try to spend it you could be arrested as the believed counterfeiter. If you do find out ahead of time that you have counterfeit money, you're basically stuck with it.

Banks won't replace it even if they were the ones who gave to you! Once you walk outside, it's yours. It's recommended that you contact the Secret Service or your local police.

Okay, now that we know some history and facts, let's find out what the good guys are up to! Today, some counterfeit detectors are individual devices and some are incorporated in machines that count money. The most basic is the Counterfeit Pens. These will only catch the low-grade amateur types of counterfeits.

The next step up is a stand-alone device. You simply insert the bill and it pulls the bill through the device and clearly signals good or bad. A good example is the Cassida Omni-ID. You keep it close to the register and use it as the bills come in giving you instant verification. Many different types, all reasonably priced. They can also be used to validate Driver's Licenses, Passports, Credit Cards, Traveler's Checks, Social Security Cards, and Casino Chips, among many other important documents.

Next, we move up to the money counting machines with counterfeit detection built in. These machines scan each bill as its counted to check for counterfeits. The basic levels of detection are UV, MG, IR, MT, MR, Size & Thickness Detection. 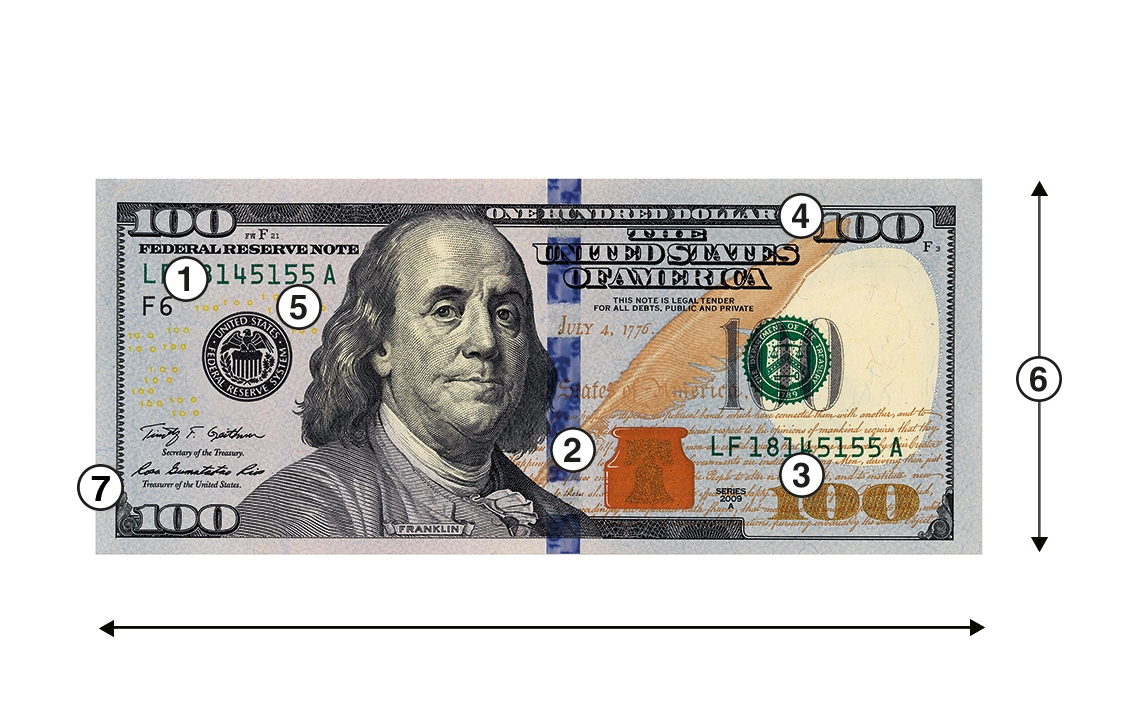 UV stands for Ultraviolet. UV is the most common type of Counterfeit Detection. Bills are made of 75% Cotton and 25% Linen. The US Federal Reserve adds ultraviolet (UV) ink with fluorescent phosphors to bills that cannot be seen in daylight but are clearly visible under UV light at an exact wavelength of 365 nanometers.

If the UV printed images glow when subjected to the UV light, then the banknote is expected to be authentic. UV detectors use a bulb emitting UV light at the correct wavelength and visually verify that it contains UV ink markings.

Such UV security features are valued because the materials used are highly volatile and can get corrupted quickly when inexperienced counterfeiters use commercially available digital printers and inks to create fakes.

MG stands for Magnetic. MG is normally in addition to UV. When the US Federal Reserve prints money, they use ink that contains iron oxide which can be magnetized. Magnetic ink is used as a way to reduce counterfeiting. Every bill has its own magnetic signature that can be read by ATMs, money counters, and even vending machines. The magnetic sensors in Counterfeit Detectors that include magnetic ink detection, search for this magnetic property on the bill. If the magnetic properties in the ink are not detected, the counterfeit detector will flag it as a failed bill that is suspected of being counterfeit.

﻿IR stands for Infrared. Currencies may be printed with Infrared inks that either reflect or absorb infrared light. These are undetectable to the human eye. They also weave the metallic thread into its bills, in specific sizes and locations. Money counting machines with infrared technology use sensors that detect the presence of both types of Infrared inks, allowing them to identify legitimate currency by nation and denomination.

Metal Thread detector (MT) and Magneto-Resistive sensor (MR). The MT detector is used to check certain metallic components (magnetism) on the passing banknotes. MR stands for Magneto-Resistive equipped with a long MR sensor which is an array of 4 MG heads into one. It scans most part of US bills to check for certain magnetic properties for suspect bill detection.

﻿Since 1969 all circulated bills have the exact same dimensions & thickness, 2.61 inches wide by 6.14 inches long, and the thickness is 0.0043 inches. Money counter models that have this functionality can check each bill for length, width & thickness as the machine counts the bills.

CIS stands for Contact Image Sensor, but it is a feature that does need explanation. It's not as much a form of counterfeit detection, as it is bill recognition. CIS is found in your top of the line model cash counters. It is a small flatbed scanner built into the bill counter.

The scanner enables the machine to recognize denominations by being able to "see" the bills that are passing by.  It also enables the machine to scan serial numbers if desired.  The CIS technology makes the bill counter much more accurate in regards to recognition of bills and denominations and is preferable over units only equipped with magnetic & infrared sensor recognition. A good example is the Carnation CR1500.

So, what we've learned is that any business or organization that accepts cash is susceptible to counterfeit money. Don't kid yourself, it is a big problem and you need to protect your business.

Fortunately, we have you covered at CurrencyCountingSoluions.com. We have a wide selection of money counters from the moderate units with counterfeit protection all the way up to the bank-grade high-end models that have all seven levels such as the Safescan 2885-S or the Safescan 2985-SX.